Withhold Release Orders: How Forced Labor Laws Are Being Resurrected for Traded Goods in the 21st Century

It may come as a surprise to most businesses that some goods around the globe are still being made with forced labor at this moment in time. But unfortunately, that is the case and decades-old laws are increasingly being dusted off to address these practices. This month Congress passed legislation explicitly prohibiting imports from China’s Xinjiang region of goods produced by forced labor.

Under U.S. law, the importation of goods mined, manufactured, or produced “in whole or in part” in any foreign country by convict, forced, or indentured labor, including forced child labor, is forbidden (Section 307 of the Tariff Act of 1930 [19 U.S.C. § 1307]) (Section 307). “Forced labor” under this law is defined as “all work or service which is exacted from any person under the menace of any penalty for its nonperformance and for which the worker does not offer himself voluntarily.”

Customs and Border Protection (CBP) enforces this provision through the issuance of Withhold Release Orders (WROs) and findings. Even though this law has been in place for over 90 years, it has been largely dormant and underutilized until recently.

Section 307 has been in force since 1930, as part of the Tariff Act of 1930. However, it had not been applied regularly until the 1990s when CBP issued 31 WROs and six findings, mainly against goods from China. 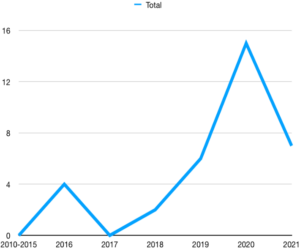 During the last several years, Section 307 and CBP’s authority to enforce this law underwent significant adjustments. Simultaneously, other factors have also bolstered measures against the importation of goods made with forced labor.

The United States-Mexico-Canada Agreement (USMCA) Implementation Act, signed on Jan. 29, 2020, ordered the establishment of a U.S. interagency group, the Forced Labor Enforcement Task Force, to monitor the enforcement of Section 307, which on May 15, 2020, President Trump established by Executive Order 13923.

The USMCA Implementation Act also contains a specific section relevant to production in Mexico. Under Sec. 744, the Task Force must develop an enforcement plan to address the production of goods by or with forced labor and report to the Interagency Labor Committee (another interagency body created to monitor the implementation of the labor commitments in the USMCA) about the enforcement of Section 1307.

More recently, on Dec. 16, 2021, the Senate passed a bill barring all imports of goods from China’s Xinjiang region due to forced labor conditions, in a direct application of Section 307. CBP will enforce the restriction unless importers provide evidence that goods were produced without forced labor. It is worth noting that there is certain overlap between the language in the new bill and the existing forced labor provisions of the USMCA.

Taken together, these developments are likely to increase CBP’s scrutiny and enforcement of imports from at-risk regions. The uncertainty arising from a WRO can have a chilling effect on the supply chain and companies involved in cross-border transactions are advised to familiarize themselves with Section 307 and the regulation enforcing it.

Enforcement of Section 307: WROs and Findings

Anyone suspecting that an imported good (or one about to be imported) is produced with forced labor can make an allegation to CBP. The agency will initiate an investigation provided that the information received complies with certain requirements. CBP may also start an investigation on its own at any time.

If CBP finds that the information “reasonably but not conclusively” indicates the use of forced labor under Section 307, and the good is being imported or is likely to be imported, the agency will issue a WRO and will detain the goods covered in the order.

To have the goods released, the importer will need to provide evidence showing that they were not produced by forced labor within three months after the date of the importation. If the information is timely submitted and CBP considers the good to be admissible, it will be released. Alternatively, the goods may be exported within three months or before being seized under a finding issued by CBP, whichever occurs first. If CBP determines that the goods are not admissible, the importer must export the goods or they will be destroyed by CBP.

If you have any questions regarding this alert, please contact Mark Ludwikowski (mludwikowski@clarkhill.com; 202-640-6680); Aristeo Lopez (alopez@clarkhill.com; 202 552-2366); Kevin Williams (kwilliams@clarkhill.com; 312-985-5907) or another member of Clark Hill’s International Trade Business Unit.

Celebrate our new Mexico City Office with a reception and educational event.

We will toast our new office space and location with a cocktails and small bites with Mexico and US-based colleagues and friends.

On December 29, 2022, President Biden signed the SECURE 2.0 Act of 2022.
Join us as we discuss these changes and what they may mean for employers.

How can retailers shore up their supply chain contracts in 2023?

Mark Ludwikowski and Kelsey Christensen explore several issues that retailers should consider when updating their supply chain agreements for 2023.

The Clark Hill approach is equally pragmatic and growth-minded, which is why we understand our clients’ toughest business challenges. Our multidisciplinary, global team of advisors focuses on smart legal solutions, delivered simply.